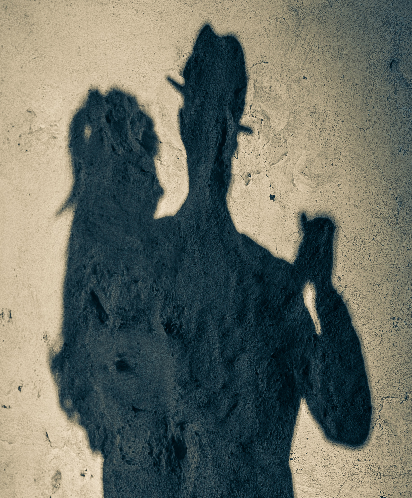 Another visit from an old friend

The chickens were making an odd noise, so I got up from the desk where I had been ‘working’ on venues to see what the ruckus was.  As I went back to the coop I saw a thin man in an old suit was there peering in, and poking one of the hens with a stick.  He had a decidedly oily appearance.

“Erik, I didn’t know you would be home!”

“Is that why you jumped over the fence and are now harassing my chickens?”

“The back door was locked, so I couldn’t grab a beer.  I was killing time while I waited for you to come back.  Amigo, he estado cerbrando, y tengo la solución a tu problema!”

I’ve heard his crazy ideas before, and he always asked for money when he put forward even the slightest effort.  I sighed and told him, “I’m not giving you any money, but if you’d like we can go to the bar and you can tell me all about my problems.”  This wasn’t an expensive habit, but my liver could ill afford prolonged contact to him.

We pulled up a stool at a place up on Fourth with cheap drinks and heavy pours.  I was going to get my money’s worth!

“I heard about your friend with the car-place.  I was sad to hear that you were thinking about stopping the Milonga after this month, although you should get a better name next time you do one.  Like after a song, the way we do it in el Sur.”

I almost choked on my gin, “Wait, I was just scouting new venues!  I really wasn’t thinking about quitting, I’ve out lasted almost every location we’ve danced in.  Who said that?”

“Unimportant.  And the reason you out last venues is the same reason you always find your keys in the last place you were looking.”  I wasn’t sure if the drink was affecting my unlikely counselor or if it was one of his deep moments.  After taking a protracted swig he continued, “But it is good to hear that you are looking for a new place.  That was part one of what I was going to tell you.  Before part two, we have another drink!”

I placed another five on the table, and the artist/bartender poured another round.  After another sip of what he called ginebra the ideas came freely, “I know you have your reason, but I think the name is stupid.  Can I say that to you?  But you will keep it.  You are stubborn, like me.  Next I think you should get some friends involved.  You could have your friend from Argentina come and host one month, and invite that cute one from Phoenix down to teach a class too.  What do you think?”

“By my friend from Argentina, am I to assume you meant yourself?”

“Aside from that dubious suggestion, and the strange pass you made at an old friend of mine just now, I think you just described what I have been doing for years.”

“Hmmmm.  Perhaps it was someone else’s Milonga I had suggestions for….”

I looked at my half full glass and sighed.  “You know, we can have a drink and chat anyway.  And after what you did that one time, I’m never hiring you to teach again.”

“Next week then, and I’ll have more ideas for you!  Also, did I not apologize enough already?”

“It isn’t me that you need to apologize to…”