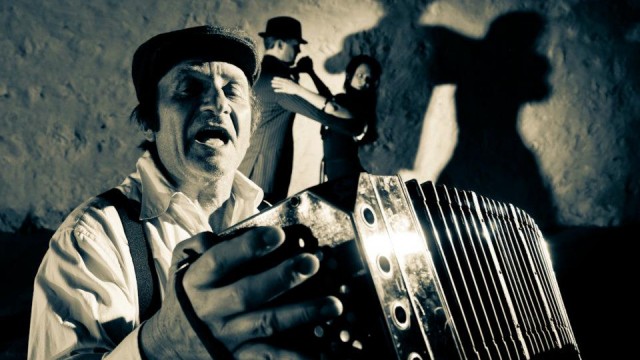 I was walking home from practicing the other night, taking the downtown alleys that I usually travel.  I’d been thinking about some material that I’ve wanted to teach, but have had trouble getting students interested in.  As I strolled behind what used to be a Peruvian place a familiar, but older, sounding voice called out to me, “Colfa, why is there no Milonga here tonight?”

I knew that voice; there was only one person who would call me that anyway.  “Pet..” I started, but was hushed down.

“Don’t say my name!  I still owe McGarrey some money!”

“That won’t be a problem.  There’s no Milonga here anymore, and he’s out of town for good.”

“Excelente.  Well, buy me a drink!  Then you can tell me why you look so worried and where the Tango is now.”

We went over to the District, got some rotgut, and I let him know what was on my mind.  How there are problems teaching codigos, how the flow of traffic is hard to control, how much people talking on the floor has come to bother me on a personal level.  The old man listened and nodded, and I think he had two more glasses of Old Crow while I talked.

“Well Colfa you sure seem more old now than when we last met!  The people talking on the floor bother you!  Jajaja!  You remember what it was like to be young still?  We never teach codigos you just learn them.  Pero la Pista, that is something I can help you with.  There are three things you already know, but you have no words for.  With no words, how can you discuss this with anyone?  Here is where we start.”

In a perfect world we will all move seamlessly around the floor, more or less in unison.  This state of floorcraft bliss is subjective and the absolute speed varies from song to song and Milonga to Milonga.  You have to be able to adapt to the relative conditions of each song and each floor.

Oftentimes one of the couples on the floor will not be moving at quite the same rate as the others.  There are two basic types of “bad couples.”  First are space hogs, they hog space by not progressing forward.  If you notice there is a lot of space in front of you, and people are backed up behind you then you might be a space hog.  Second are the jammers, they keep running into the couple in front of them!  If there is a ton of space behind you, but the couple in front won’t get out of your way then you may be a jammer.

What do you do when you notice someone else being either a space hog or a jammer?  You don’t call them out during the Tanda, or even the Cortina!  This is always counterproductive.  There is little to do to solve the problems immediately, but a word or two later on may help.  It may also result in hurt feelings and misunderstandings.  Sun Tzu, in the Art of War, advocates becoming formless like water and I think this is the best short term solution.

In an effort to avoid the hogs, some people moving around the offender.  I’ve heard comments that cutting lanes is considered to be almost as bad as the hogging behavior itself, but on a floor with some depth to it you could get away with it.  A good leader will have enough repertoire to still dance without progressing, but it can be a frustrating dance nonetheless.  Jammers are harder to deal with, when someone is trying to make you move forward and invading your space a leisurely volcada is probably a bad idea!  The most tactful answer to a jammer is for the leader to interpose between the offending couple and his partner.  I’ve also found it useful to slow down considerably and allow the eager-beavers to pass, while this only sends the problem downstream they are no longer a danger to my partner and I.

The Form of Function

“Colfa, is it not funny now that you lost weight to call you that?  We need a new name for you, and a new drink!”

Another round of whiskeys, it was getting late.

“So what is the best way to have good floorcraft?”

The idea seemed to be this; when couples follow at a respectable distance from each other, a Tango Train is formed.  The back couple protects those in front from harm, and the lead couple keeps the train from running into danger.  The couples in the middle benefit the most, having a blissful bubble to dance smoothly in without being disturbed.

“So, how do you decide who is what part of the train?”  I asked.

“Es organico. You just do it.  We don’t talk about it, that would be unmanly.  We all dance together, like… como se dice la Gestalt?  All parts of one thing?”